Work on the Mast

During the last week on Dauntless, getting her ready for the winter without me, tears all around, I realized how sweet it was to work under a roof. 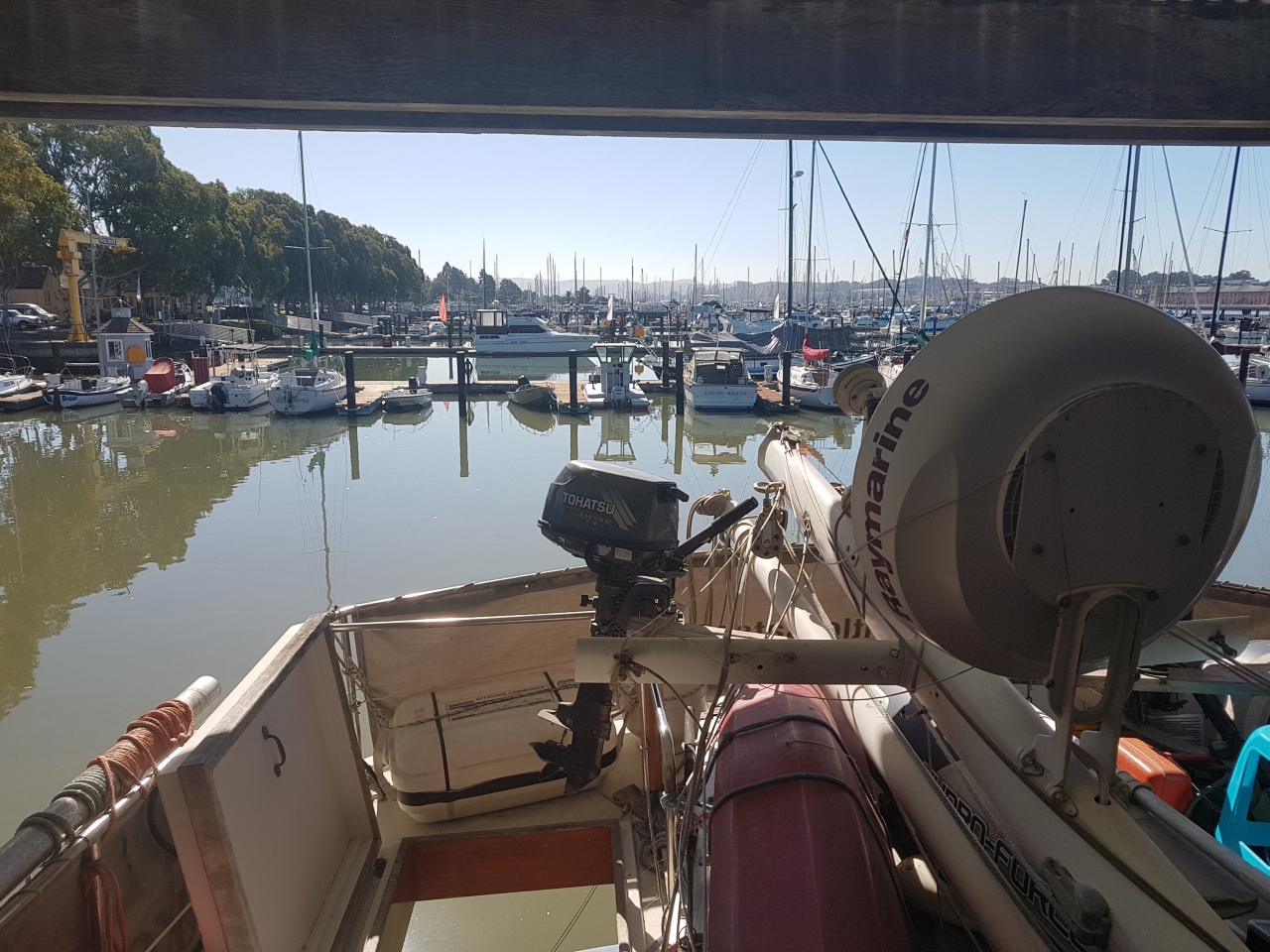 Looking aft with the mast down, under the roof of the Vallejo City Marina

I loved it so much, I changed my project priorities a bit.  I figured it made the most sense to do those things that are difficult to do under normal circumstances.  It is such a pleasure to sit on the fly bridge, out of the hot blazing sun or the cold wet rain. With the mast down, I didn’t have to wrap one arm around the mast and hold on for dear life. Under such ideal conditions, I realized I had to get all the things done I had been contemplating for years.

Four years ago, getting Dauntless ready for her first ocean crossing, I took what was given. Unlike the Lexan storm windows which were done in the last hours, the Maretron system and instruments on the mast were completed with days to spare.

One thing that has sunk into my dense brain is if I don’t have a clue as to what I am doing, then at least do the simple solutions instead of making complicated ones. To that end, I mounted the Maretron instruments on an existing antenna arch that extended forward and was above the radar.

It was the simplest solution and worked well enough for four years, but now, I wanted to make it better. I have felt that the weather instrument that measures all the normal weather parameters, including wind speed and direction, is not in a clear air stream with winds from the stern. As you know, this Kadey Krogen loves following winds and seas, therefore if the data is being affected under such conditions, it’s not ideal.

The other issue that is also related to stern winds is that every once in a while, lines related to the paravanes, get enough slack that over time, being blown forward, like 21 days in following winds and seas, that they were easily snagged on those weather instruments or the bracket itself. In the first years, more than once, after deploying the paravanes, I discovered that the weather instrument arch was carrying the weight of the paravanes. Not good. (Though it does confirm the forces on the paravane system are as expected).

Just too many times, that antenna arch has been seconds from disaster. Time to get rid of it. The Maretron cable that runs inside the mast must also be replaced. So, the Maretron WSO and GPS will be mounted on the spreaders. In addition, I will mount my Wi-Fi extender antenna and I hope to also move my current AIS antenna to the spreader. Currently it’s mounted on the cowling of the fly bridge near the helm. It’s too low. Many times, it will not see big ships until 5 or 6 miles away. At the Dauntless speed of 6 knots and big ships possible speed of 20 knots, that still gives me more than a 10-minute warning, but that antenna should be maximized just on principal. 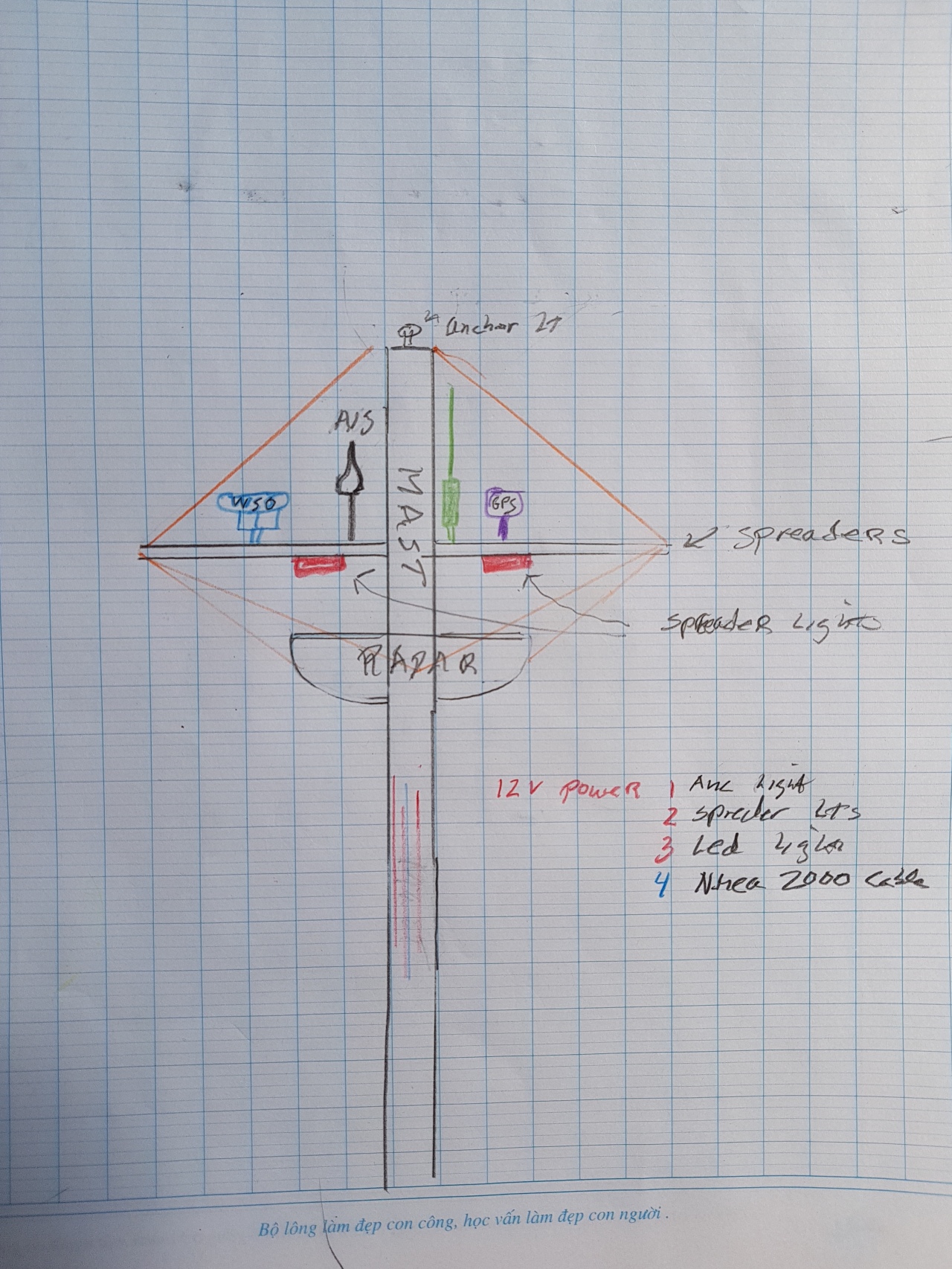 Plan for the Mast Spreaders
March 2019

I also need to remount the two Chinese LED spreader lights. The lights themselves, bought 5 years ago on Amazon for $20 each, have been great, but the mounting hardware is mild steel that rusts badly. I have a way to mount them directly to the spreaders, without the steel hardware. Since I am doing that, I will also change the electrics a bit and add an electrical circuit to power a LED stripe that I will also mount on the mast.

Now, your thinking, while I have eliminated one protuberance, I have made the spreaders much more complicated. That’s true. But I have a plan.

I will also add a 1/16th Amsteel line from the top of the mast to the end of each spreader, then forward to the front of the radar arch. Looking aft from the bow, this will look like a triangle. Looking from either side, this will look almost like an obtuse triangle.

Now, I have not added this yet. This will happen in March when I return to Dauntless, but in my mind’s eye, I see this little line as making it much more difficult for a loop of any line to become snagged around the spreaders, radar arch or the mast itself.