My first wife was a vegetarian. While I wasn’t, I did eat less mean than previously and tried not to cook meat that produced smoke (like hamburger) in the house. Therefore, since the mid-‘70’s, I’ve had a BBQ grill no matter where I lived. 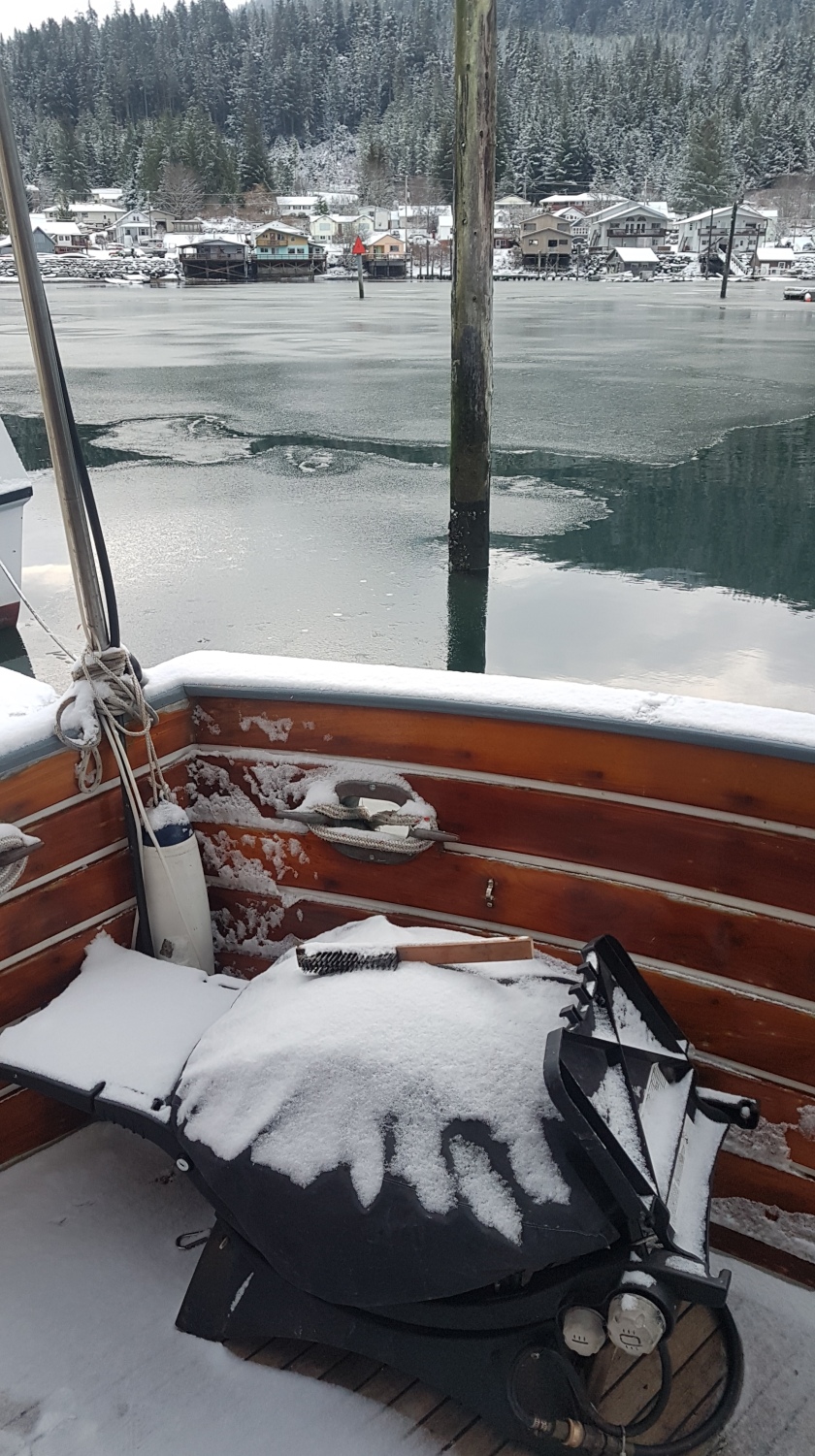 Whether in Fairbanks, Alaska, Italy, Germany or now, on Dauntless, I’ve always had a grill. Since the early ‘80’s, when I lived alone in Southern California, I came to appreciate the convenience of a gas-powered grill.

For 30 years, I’d always buy the cheapest two or three burner BBQ I could find. They would typically last half a dozen years before it was time for a replacement. Sometimes that replacement could be hastened, as when moving to a new house in Fairbanks, the grill was packed in the back of the pickup and at some point, fell out.

Fast forward a decade, living in a typically small one-bedroom apartment in New York (Manhattan to the uninitiated), I had only a little hibachi that we would put on the windowsill of our apartment to use.

We wanted a real terrace or patio, so we could have a real BBQ grill again. Though we were able to satisfy our craving for burnt meat as we did BBQ almost every weekend on my mother’s apartment terrace in Brooklyn’s Brighton Beach/Coney Island.

So, we started looking for a new rental apartment in New York and going to listing of an apartment building that I had actually looked at one year earlier, on 57th St. We really like the location and the building, though the apartment itself had a weird layout, as did its terrace.

In talking to the real estate agent, Dennis Daniel, (for anyone looking for a place in NY), he convinced us that we should and could buy an apartment in New York instead of renting. He was a true master in terms of helping us understand what we really wanted and then helping us recognize it when we saw it.

Thus in 2007, When we moved to our new rooftop apartment in New York in 2007.  Having spent half a million dollars for a one-bedroom apartment, I considered our choice of grills. This was the primary reason we had moved after all.

Reading so many rave reviews about the Weber, I figured the extra few hundred dollars it would cost was worth it. Thus, in the summer of 2007, I bought my first Weber, the Genesis.

A cooking pamphlet came with the grill, which essentially said, forgot what you think you know, do it this way and your foods, will come out perfectly.

I did and they did. Other than following directions and understanding the difference between direct and indirect heat, the build quality and more importantly the heavy iron materials used, made all the difference.

With its heavy cast iron components, the grill was able to hold heat extremely well. Thus, I did make the best steaks I had ever cooked. The reviews raving about the Weber were spot on. It did make a difference. I even used the Weber to bake apple pies, since I was able to put a little smoke into them. While I miss that Weber and that rooftop a little, I also know that it set the stage for my circumnavigation on Dauntless. I’d been there 7 years, the longest I’d lived anywhere in the previous 50 years. Dauntless had come into our lives and it was time to move on. I also know myself well enough that I’d get bored with heaven after 7 years.

In the first months with Dauntless, still in Florida before we made the trip to the Northeast, I found a light, “boat” grill. I figured I was on a boat, I had to make a sacrifice. There really wasn’t room for a larger Weber “portable” grill.

While coming north on the Intercoastal Waterway (ICW), we used the grill once. What a disappointment. It had trouble really getting hot. But within a couple of days the ICW solved the problem for me. The grill was mounted on the port rail near the stern.

One day while motoring northward, I got too close to a channel marker that was mounted on a telephone pole stuck in the water. I panicked and instead of turning the wheel, I tried to turn off the autopilot, but didn’t succeed. The pole swept along the port side rubbing on the rub rail until it got the grill, at which point it mangled the grill and mounting bracket that I had had made for it.

The grill ended up in the dumpster in St. Augustine. The Dutch friends who were with me at the time, had come from rainy Holland to get some sun, found Florida with the worst weather in years. When they left to return to Holland a week later, they were thankful to get away with their lives and back to the rain they were familiar with.

Could have been worse.

Besides you’ve read about all these close calls before. Well, most of them!

Weber had the Q-280, which was the largest of their “portable” grills and would use a normal 20-pound propane connection. I got it and it had been on Dauntless ever since.

I’ve grilled in temperatures as cold as minus 30°F (-35°C) in Fairbanks, so I wasn’t going to let a little snow get in the way yesterday.

We had planned to have steaks and we did. Delicious as ever. Thanks Weber.

2 thoughts on “BBQing in the Snow of Winter”