Julie and I presented an account of our Atlantic Passage to over 150 Krogen owners this past Saturday at the Krogen Rendezvous. 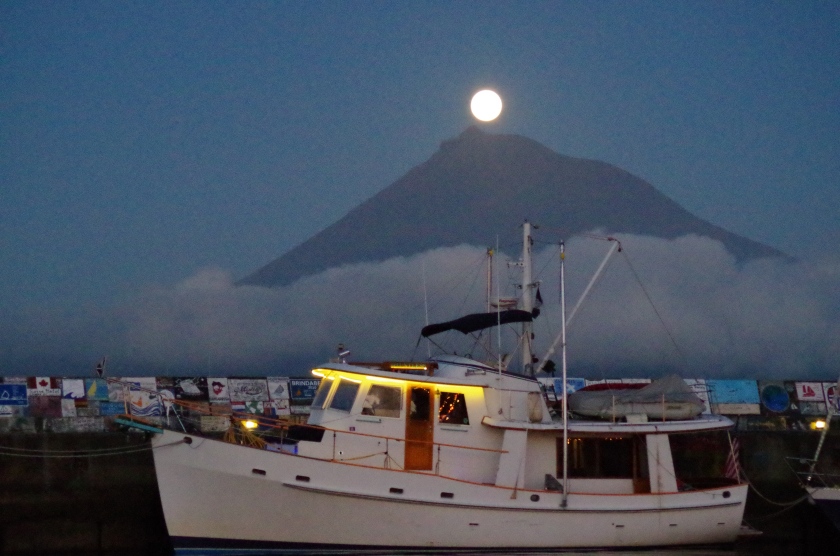 This was the first presentation we’ve ever done of our passage and it was really well received.  A bunch of folks asked me where else we were presenting and at this point, the answer is nowhere because no one has asked us yet.  I’m definitely going to look for more opportunities because I like sharing how possible this is in an older boat on a limited budget.

Besides talking about our preparation, and all the books we read, here are some highlights:

Q:  What is the age of Dauntless?

A: 1988, 27 years old. [Audience gasp.  This reaction surprised me because it never occurred to me the age of the boat would be an issue; I just thought it was about the condition.]

Q: Did you change the oil?

A: No!  I wasn’t to stop the engine in the middle of the ocean for no stinkin’ oil change.

Q: Did you ever turn off the engine?

A: Not on purpose.  [Then I went into a five-minute recount of all my shenanigans with changing the fuel filters and closing valves that should be open, and vice versa, which resulted in me killing the engine, twice!]

Q: Could you check the amount of oil you had with the engine running?

A: I had read on Trawler Forum that I may be able to check the oil level while running.  Well, all I could tell was that there was some amount of oil in there, but it was not possible to get a reading. Therefore, I knew the oil consumption in the past was a quart of oil every 50-70 hours, so I just added 2 quarts every few days whether it needed it or not.  When I did turn off the engine when we arrived in the Azores, the oil level was exactly where I expected it to be.

Q: What would you do differently in hindsight?

There is virtually nothing significant we would have done differently.  The actual route we took is one issue, but as I rethink the rationale for the route we took, it still seems it was the best option given the ice conditions east and south of St. John’s NF.  I’m disappointed we never got to see an iceberg and as our start date got pushed back to late July, maybe we should have tried to make St. John’s.  In hindsight though, I was not that sure enough of the fuel consumption and Julie had a deadline to get back to work, so the Azores were still the best answer, even if it added 5 days to the passage.  It does seem that had I been able to stay on the great circle route, topping up the tanks in Halifax would have allowed me to get to Ireland direct.  Umm, next time.

A last thought on pictures and video from the trip: Being back in NY, having the Krogen Presentation to do and finally having fast, reliable internet connection allowed me to finally sort through the 1200 pictures and 130 videos we had taken during the trip.

While there are some really nice pictures, especially of sunsets and sunrises, I now wish I had been more meticulous in making some quality pictures and videos that told their own story each day in a systematic manner.

A note about the videos.  The file date is basically the date time stamp of when it was recorded, thus, 20140728_201731 means it was recorded on July 28th, at 20:17 hours.  This was on Eastern Daylight Time until the Azores at which point I changed it to GMT (which was local time).

Also the quality is not the best, but rather than not show post them, I thought they still depict the conditions and give a good day to day story of conditions.

Virtually all the videos are at: http://dauntless.smugmug.com/Videos-of-Dauntless-Atlantic/

The pictures will be uploaded within the next day or two.