Day 2 started beautifully, at least the sun rose I the east and as I hauled the anchor, I marveled at the beauty of the tree covered rocks that is the east coast of Sweden.

Quickly getting underway as I plotted my route for the day, I made my coffee and warmed up Danish like thing I had found in Helsinki and then froze for mornings just like this.

The Helsinki Danish really wasn’t; a Danish that is; and like many pastries in eastern Europe, they look better than they taste.

Within minutes I am motoring south between islands to the passageway to the next series of parallel islands.

After passing two, quite small passageways, I turn the corner to enter the third and don’t see it.

I reverse to stop forward movement while I get the binoculars to look that the passageway which is marked on both my charts as a “recommended track”.

I’m in an alcove with the exit not more than 3 or 4 meters wide.  There is a sign saying the depth is 2 meters, which works, but the more I look at this passageway, the more I fear going in, getting stuck, half in and half out.

Within minutes, I accept that I shall have to turn around and go the “outside” route.

So an hour later, I am just past my morning’s starting point.

The outside route is less protected from building seas and the winds have been blowing 15 to 30 knots for the last 48 hours at least. 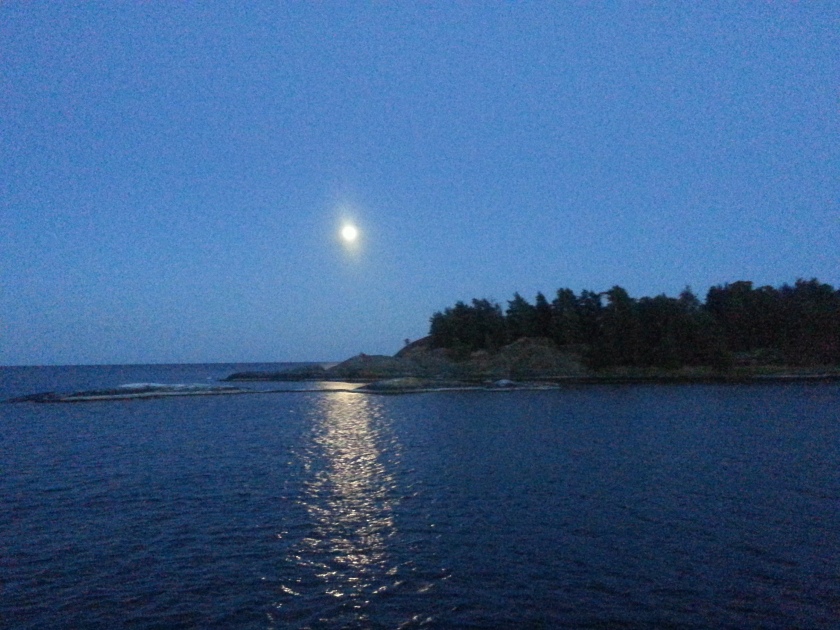 But in the lee of this long, 4 mile long island, seas are only three feet and not so bad.

I get to the bottom of the island, wondering why I have not seen another boat on the water this morning, whereas yesterday, there were numerous boats out everywhere, when as I round the corner, we are hit by 6 to 8 ft. waves with a short period.

Really annoying, with Dauntless bouncing up and down like a pogo stick.

Checking the charts again, I see if I take a direct route to the southwest, it’s only 16 nm.  I can put out the paravanes and just suck it up.  But I also see that our speed has fallen to 3.9 knots.  This is looking like the English Channel all over again.

So I look again at the charts and if I go NW for an hour, I can then turn west and get into sheltered waters after maybe another hour or two.  I decide this is the best option, as I am not mentally ready for an ocean like journey yet.

So, now, an hour later as I write this, I have just completed the NW leg and am now heading west.  The seas are becoming calmer, now only 3 to 4 feet, and as I go west they will remain choppy, but small, in spite of the wind I hear blowing thru the rigging.

I am also very close to the point I would have emerged had I been able to take Darget’s Kanal, earlier.

I awoke this morning really happy about the journey back to Ireland.  Alone for the first time since mid-May; a certain efficiency comes over me when I have no one else to depend on either for physical or mental assistance.

Other than my near debacle leaving my slip yesterday, pretty much everything else goes well.

I even bbq’d 4 lamb chops while underway yesterday, realizing that one of my big problems being alone is that I like to go until just before sunset, but by then, it’s too late and I’m too tired to cook dinner. Therefore the solution is to eat earlier in the day, like mid-afternoon. And I decided yesterday to see if it works.

It did and once anchored; I could relax, do my end of day checks and get ready for bed.

So, I’m looking at today, as a reminder, that I can’t totally ignore the weather, but even in these relatively protected waters, I must plan accordingly.

This portion of the trip should actually be the prettiest of the whole trip, and sadly I’m alone for this portion, because I do like to share the good things and prefer being alone for the bad things.

Having got to the sheltered waters, winds still 20 knots, but with no fetch, the seas are choppy at about a foot, sometimes a bit more, I decided to pull in the paravanes, also because it will become shallow again and that’s one more worry I don’t need.

So with my current, refined system, I stop the boat, get to the fly bridge and use the winch to pull up poles and birds simultaneously.  I then come down to the side decks, lift the paravane (now right above the rub rail, just below the cap rail) put it on its spot on the cap rail.  At which point I must go back to fly bridge and let the small line out which is whipped to the larger lines on the birds.  This just allows me to use the slack to tie the bird to the pole while it’s on the cap rail.

All that took only 4 minutes, and felling very proud of myself, I bounded up the side deck stairs to the pilot house, only to hit my head on the overhang.  I’m not an inch shorter I think.

2 thoughts on “One Dead End Leads to Another”