After 8 months of waiting, repair and refit, Dauntless got underway to day a little after noon.  The first three hours are going down the river Barrow and the Suir.  Leaving just after high water, we got a little boost of about a knot (1.2mph). 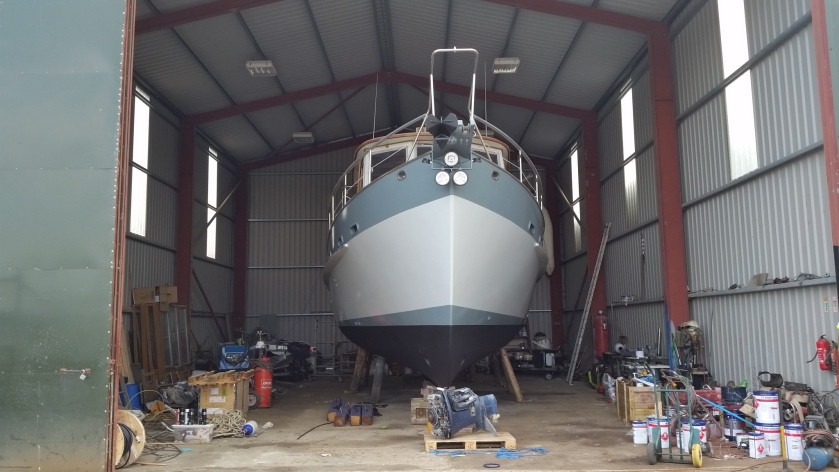 But although we are only going 7 knots, I’m feeling nervous. As I slalom down the river, I actually slow a bit, just a hundred rpms, maybe half a knot, just so I can feel comfortable again.

Much like getting off the plane in Venice, Frankfurt or Amsterdam, picking up the rental car, leaving the airport and immediate being on the Autostrada, Autobahn or AutoRoute, I start off in the slow lane, maybe going 60 to 70 mph, until I get my senses up to speed.  This means checking the rear view mirror very carefully, that car coming up may be going double my speed or more.  The speck in the mirror can quickly become a problem if I get in the way.

With time, minutes, maybe a half hour, I’m up to speed.  Now the issue is can I stand the buzzing this little economy car makes at 100 mph?

In my most recent trip to Spain, I had one of the worst cars ever.  Maybe if I drove it off a cliff, it would hit 100 mph, but I have my doubts about that too.  So I was bemused to hear this car being touted on the radio ads as having an “over-efficient” engine.  You have to hand to those marketing people, they can even change the laws of the universe.

One last comment about cars, slow ones at that.  While you may be thinking, good, it’s safer that way, the opposite is the reality. With a slow car, since it takes so long to get up to speed, whatever speed that is, the tendency is to simply not slow as much whenever possible, whether that be for the curve at the bottom of the hill or trying to get past a slow moving truck (in Europe they never go faster than 50 mph!)  A wonderful idea you may also think, but then driving becomes an ordeal of passing moving roadblocks and the box of corn flakes now costs $8 since it took a week to go the distance from NNYC to Chicago.

So after going a bit slower for a bit, maybe an hour, I was back in the rhythm of Dauntless and pushed the speed up to 8 knots, what with the river current.

Ireland was having its second summer like day since August 1976, so it was wonderful cruising.  Even the little one-foot chop that was on the south coast as I headed for Kilmore Quay was enjoyable.

But best of all was the deep blue water, and as you watch the little waves break, the water is so clear.

Coming into Kilmore Quay was quite tricky, and Michael at the boat yard even drew me a map to emphasize not to deviate from the plan.  And when the water beneath my newly skinned and painted keel got down to only 2 and a half feet, I was thankful for the guidance.

There was one space left on the end of the dock, the hammerhead, and happily the people on the English sailboat in from of the spot were there to grab my lines.  That takes much of the stress out of docking.

Well, I’ll have another chance tomorrow; that’s after I back out of here!