Splashed a hundred feet off our bow. Thick black smoke poured from the funnel of the WWII vintage ship as she pushed thru the seas at her full speed of 18 knots.

Which was still double the speed this Kadey Krogen could do. In fact, the only time we would ever see even 15 knots, would be if we went over a waterfall.

My little imagination had to settle down; returning to reality, I knew why we were being stopped. An hour before, a panga had crossed our bow about one half mile ahead. Seeing our paravane stabilizers deployed, I’m sure he reported that we were fishing or trawling. We do look like a trawler after all.

Therefore, I was not surprised an hour later when the grey shape of a warship appeared on the horizon.

Watching the radar track, they were aiming for us, so I was ready for their call. They hailed us as “the fishing vessel”. We changed to a working channel on the VHF and they requested that we stop for an inspection.

From this start to finish, the Mexican Navy was the epitome of professionalism and courtesy. It’s simply the nature of Mexicans as I’ve experienced in all my encounters these last months. No matter where or when, even in New York.

Asked to heave to, making no way, our ride became very rolly, as the paravanes need to be moving to stabilize the boat. So, I asked to make some way and that request was granted. Larry and I then watched for the next half hour as the Farias deployed their skiff (an 18-foot panga), which then motored over to us.

We had retrieved our lee side paravane pole and bird, so the panga could offload on that side. The boarding party consisted of about 6 and the lieutenant in command spoke good English. He proceeded to tell us the same boiler plate language that had been said when we were initially stopped, essentially that since we were in Mexican territorial waters, they requested that we agree to an inspection (yes, it was a request that could not be denied, but it’s still nice to be asked, even when we all know what the response must be, “Yes, of course”.

Obvious as soon as they were aboard that we were not fishing, the lieutenant then proceeded to go through an inspection checklist. This did take more than 40 minutes, as they recorded serial numbers of many of the electronic devices on board, even cell phones and radios. I got the impression that this recording of such information was to demonstrate that the inspection had been carried out. 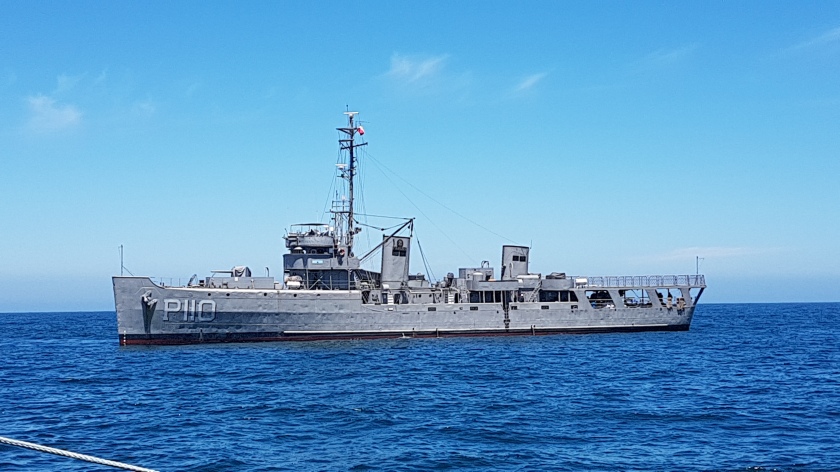 He also did look in our living areas, in the drawers under the bed and in various storage compartments. Almost everything is stored in large plastic containers and tubs. He asked me to open one that was stored in the passageway, under the washing machine. It contained my winter coats. That was the only and only container I had to open, which I was grateful for since we’d probably still be there if I had to open the 20 odd containers of spare parts in the engine room.

I asked if their ship was a minesweeper and they confirmed my guess, adding that is was built in 1942.

I told them they should ask Trump for a new ship. They thought this was very funny. I was serious. If we can spend billions for a wall, the least we could do is give the countries the tools they need to stop any illegal activities. That we don’t, just shows what a farce this whole secure the borders act is.

At the end of the inspection, they did ask, phrased as, “our commander asks if you have a new Mexican flag? As the one you have is too frayed”

This also didn’t surprise me, as having decent national or courtesy flags can be an issue worldwide. And in fact, I did nave a new flag (remember, on a boat, if you need one, you need two) and they were pleased when I replaced it.

So, ended our stop by the Mexican Navy. Very nice, polite and friendly, I thanked them for keeping us all safe.

3 thoughts on “The Shot Across the Bow”