It’s going to be hard to say goodbye to Ireland, the land is gorgeous, the people wonderful and the sun shines at least once a month to remind you what it looks like.

Today, I took a day off.  Every day I’ve been working on Dauntless, getting my little projects done.  The new holding tank is in and connected, the bilge pump also, so forward bilge work is almost done. 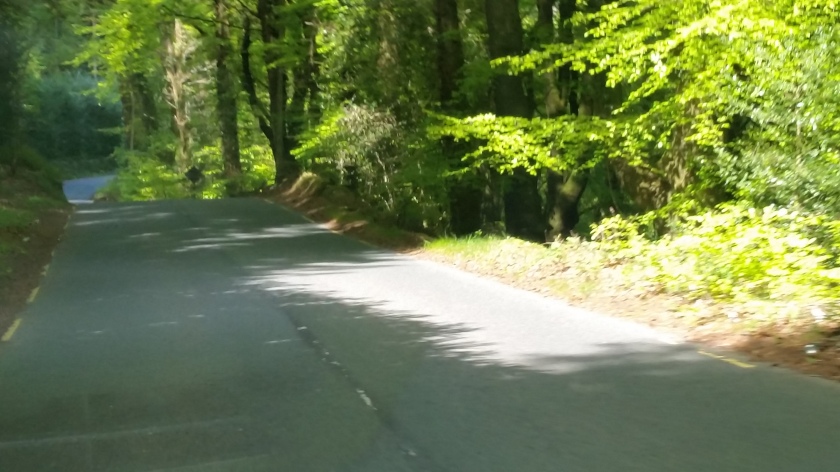 So, with the sun out and the buds on the trees getting bigger by the day, I thought it would be a good day to drive to the town of Roundwood, about 70 miles NE of New Ross, about 30 south of Dublin.

Well the drive turned out to be even prettier than expected.  The roads were even more picturesque and the traffic was actually minimal.

The restaurant, Byrne & Woods, lived up to expectations. Here is a link to my review:

As I got off the bus today, pleased with myself that I am starting to understand the bus routes, I headed to my first stop, the butcher, you know, the butcher who showed me his meat last week.

So he asked me how much pork belly  I wanted and I told him it was just for me, so he cut me, what turned out to be 4 ribs and then cut it again, telling me as he wrapped the now two packages that I could freeze one.  The pork belly here is sold as the pork belly we get in NY plus the ribs that we don’t get.  So tasty. I did marinate it for a few hours in a Korean style marinade (but I keep the skin dry).

I then headed to the baker, Cupcake Couture.  Their cupcakes are to die for.  It puts the overpriced, oversweet, over chemicaled cupcakes of the specially places in NY, in their proper place, much like Crumbs Inc., RIP.

This small place has only two showcases of baked goods and they don’t try to be everything to everyone.  They pride themselves on “All goods are crafted by hand in front of your eyes in the open kitchen”.  Umm, I wondered why the guy serving me had a chef’s uniform on covered in flour. If you ever come to Ireland, come soon and I’ll take you there and you too will know heaven.

The last stop, not the candlestick maker, but the electric shop where I exchanged the three ton transformer that had stopped working when I plugged it in the first time.  Maybe it was only 40 lbs., but I had walked to the place on Saturday afternoon, only to discover that these people have a life.  Pretty much all shops are closed by mid-afternoon Saturday.  Let’s not even talk about Sunday.  Anyway, it’s nice being in a culture that values everyone’s time off, I told myself as I trudged back to the boat on Saturday.  But today they were so nice; didn’t make me feel guilty for wanting to return or exchange it.  I hate returning things, even when they don’t work.  Much like my father, who while I was growing up I thought was too timid; my mother was the exact opposite, who would insist I take her to buy whatever only to return it the next week.  That was harder than crossing the ocean.  But the combination made them good parents and they knew to always have a united front in front of the kids; even when they argued!

So I finally have my electrical issues sorted out.  The Vitrifrigo fridge and freezer are now on 240v shore power and the boat batteries are charging my cell phone and computer, but not much else.  So, now leaving the boat will be less traumatic and I am going to the territory of the Angles on Wednesday.