We went to drop one crab and two shrimp pots. This video shows the last 15 minutes are we return to the Heritage Harbor, Wrangell, Alaska.

We back into our slip for the convenience being able to get on and off the boat via the stern and swim platform, plus it’s a little better for the shore power connections.

A few things to note: With a single screw and no bow thruster, Dauntless has always been a handful to get in and out of tight places. But as time as gone on and I’ve bounced off enough objects, I am pretty skilled at backing her up. She has a left-handed prop, meaning the prop rotates counterclockwise. This causes a produced prop walk to port, I have to keep about 3° of starboard rudder to go in a straight line.

She can turn 180° to port in about 60-foot diameter but turning to starboard can be problematic as I discovered one day while trying to turn on the River Maas in the Netherlands. While the current was against me, a 30-knot wind from our stern made turning around to starboard impossible as I discovered halfway thru the turn. The bow just stopped coming around. Luckily, at this point, I had plenty of room to turn the other way.

A couple of hours later, having already forgotten what I just learned, I tried again in a small harbor to dock into the wind.  (See the picture below ) To my horror, as the boat crabbed upstream and towards a boat tied perpendicular to the dock I was trying to reach, I rammed the dock with the bow, knowing that at least then, it would stop my progress towards this other boat 60 feet away. 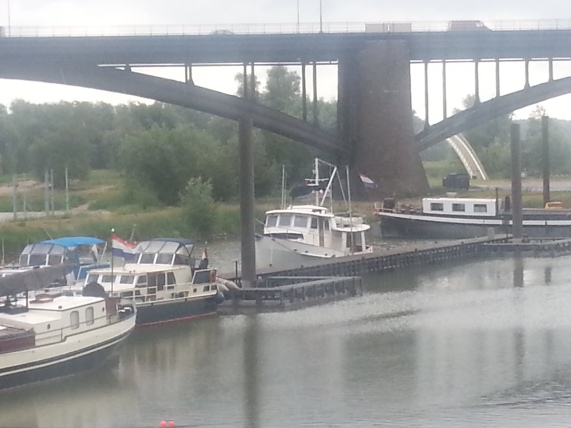 Dauntless in Nijmegen. I had come on on the left (side of picture) to turn right to dock as you see, but wind was blowing 30 knots from astern (on the bow on).BTW, this was with a working bow thruster. Another reason I learned it’s best not to depend on one for when you really need it against high winds or current, it will be least effective.

Now when you see me make a 270° turn to port coming around to 90° to starboard from our original heading, you’ll understand why I take the long way around.

Here is my docking video

I’ve been asked to give a little tour of Dauntless. Built in 1988 by Kadey Krogen, designed by James Krogen, this 42 foot boat has been the best economical paggagemaker of all time.

With two cabins, one mid-ship portside, the main forward, each with a head & shower. A very efficient boat inside and out.

Safe in towering seas, she just rolls along no matter what I ask her to do.