Asia, via the North Pacific is still the medium-term goal. 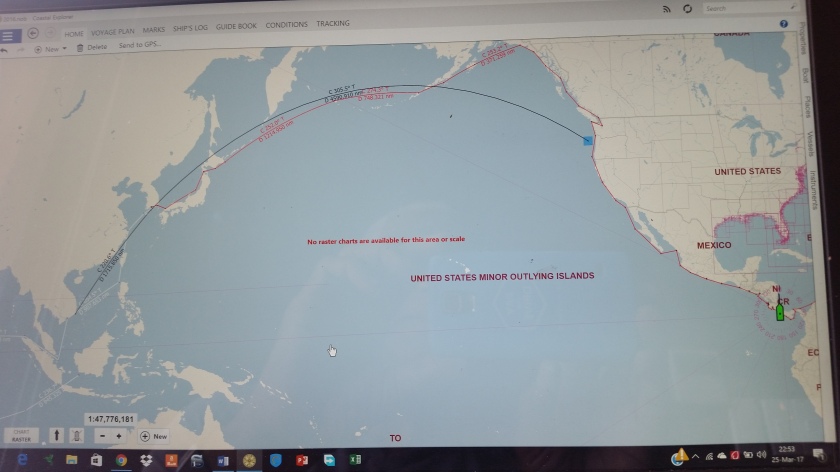 But now that transiting the Panama Canal, a set structure in time and space, has been done, I have time to take a breath.

I want to enjoy the Pacific Northwest, British Columbia and Southeast Alaska.  These areas provide the spectacular scenery of Norway with added wildlife that has been long gone from Europe.

The western coasts of Central and North America pose a formidable challenge for little boats: long stretches of coastlines with inaccessible harbors when you most need them and predominantly head winds and seas.

If I’ve learned anything in the last few years, this Krogen does not like head seas.  They make for a miserable ride that takes twice the time and fuel.

So, the first step is understanding that with any northerly component to the winds, one must stay put.

In those 45 days, I can reasonably assume that gets me about 2100 nm or someplace in Northern Mexico from Golfito.

Lastly, in the third year, 2019, that time will be spent in British Columbia and Southeast Alaska.

So, I now have a more realistic time table.

Three seasons of cruising, also means three seasons of idleness.  And we all know that idle hands are the devil’s workshop. So, while Dauntless is safely tucked in, I must keep busy at an affordable pace.

The west coast is considerably more expensive than Northern Europe, thus I find myself having to be open to new money saving strategies for the winter in particular.

Since re-crossing the Atlantic, I have been slow in updating my digital log.  Maybe because the data simply does not change very much:

The long-range plan, a circumnavigation in a 30-year Kadey Krogen, is still the plan.  I’m already thinking of where I am crossing my track and what comes after that.  Northern Europe, Sweden and the Baltic still have an attraction that is hard to beat, but who knows.

I’m always thinking of the future; reflecting on the past.  While that doesn’t leave much time to appreciate the here and now, it’s who I am.  I get far more enjoyment having the Plan come together, then just winging it.  I can read a hundred self-help books about living in the moment.  What they all have in common, is that they are written by people who are adept at living in the moment and figured out how to monetize that.  Sort of like our President who only seems to live for the moment.  Nuff said.

The cat than buys the book, gets home, reads the first page and decides to take a nap. Nap time over, the cat looks at the book, realizes it pertains to dogs and thinks that’s $17.95 poorly spent.

Then before you know it, it’s nap time again.

That is works for most people is fine with me (President’s excepted); It simply doesn’t work for me.

So, this finds me taking a break from D right now.  We’ve been together almost 24/7 since November.  My nephew Micah went home to enter Law School, so I decided to take a little break and do a little reconnoiter for this coming winter.

If I’ve learned anything while cruising with Dauntless it that at 6 knots, it takes forever to get anyplace. Therefore, it always behooves me to check out places by land and air before committing to the journey by sea.