Ever wonder why I get into so much trouble or have so many shenanigans?

By heart, I’m a scientist.  At a relatively young age, I decided to be a meteorologist.  Even at the University of Washington, when I had the opportunity to meet a lot of kids like me studying to be engineers of some type, I still eschewed engineering, believing meteorology was more “scientific”.

Only some years later, working on a forecast through the night, I realized that in practice, a synoptic meteorologist, is a weather engineer.  As we take the science of the atmosphere and put it to a practical use.

Oh, for the hubris of youth.  Sometimes I do miss the certainty that comes with inexperience and knowing everything.  In a world for me that was once black and white, there are now only shades of gray. Even that, though a better place, and heaven knows the world could use for less absolute people, does have some drawbacks, which I may expound upon at another time.

So on this sunny Sunday morning, 6 April 2014, leaving the environs of Port Palm Beach, fate had me do an experiment, that admittedly, I had decided beforehand not to do, (much like going out on deck, at night alone. I vowed never to do that and my first night at sea, single handing, that got thrown out the window.  Remember, no absolutes!)

Anyway, back to the story.  As I hauled up my new Delta 55# anchor, which worked like a dream, made even better because Hopkins Carter has the most competitive prices, and even less expensive than even Jamestown, with no stink’in shipping.

I decided to deploy the poles, but leave the fish on the rail.  That way, I would not have to go to the fly bridge to deploy them while underway and I needed to adjust the port side aft and fore guys, as port side pole was running about 6 inches too far aft for my liking.

That done, power on, look around to make sure nothing is in front of me and I see that one of the fish already fell into the water, but the other is obediently waiting as directed.

So the experimenter in me takes over.  To retrieve the fish, I would have to go up to the fly bridge and retrieve the pole to vertical, go down and pull in the fish. Forget that. I decided to see what would happen with one fish in the water.

Power on, Dauntless, like a Top Fuel Dragster, gets to 5 knots in about 20 seconds.  As I am moving north, turning towards the east to go out of the inlet (see picture), I decided to stay on the south side of the inlet, as there are bunches of sport fishers, dive boats, skiffs and all sorts of south Florida water life, including a few jet skiers, coming from Palm Beach to the north also turning into the inlet to exit into the ocean.

After carefully measuring the additional rudder, 5°, I need to keep the boat straight with only one fish in the water, I look to my left and see this multitude of boaters racing out of the inlet at Warp 10. F.. this, I throw the other fish in the water, and should a jet skier run into it and get decapitated, let heaven sort out who was right and who was wrong.

Going back to the helm, I confirm the 5° deflection is gone and I see the humongous wake rolling up on me, maybe 4 to 5 feet high.   I watch in fascination as it hits the port side of Dauntless and just like that disappears, just like that, they were gone, like Keyser Soze.

We rolled a few degrees. unlike yesterday, before I deployed them a wake rolled me 25 degrees, to each side, that’s 50°

My side decks are dry while underway. Another first.

Error
This video doesn’t exist
Even with that wake, it took just a cup full of water thru the port scupper. Normally my side decks, well not mine, Dauntless’are continually bathed in sea water.

Robert Beebe’s book, Passagemaking Under Power,http://www.amazon.com/Voyaging-Under-Power-Robert-Beebe-ebook/dp/B001NABXPW/ref=sr_1_3?ie=UTF8&qid=1396820429&sr=8-3&keywords=robert+beebe convinced me from the beginning that we needed a stabilized boat.  And even though the edition I read was co-authored, updated by Jim Leishman, a Nordhavn disciple, Passagemaking Under Power makes clear that passive stabilization, flopper stoppers (FS) or paravanes, as some call them, are superior to active hydraulic stabilizers mainly for three reasons:

So I knew we needed them.  In searching for a boat, when we came back to the Krogen 42 idea, I realized that while we needed FS, they could be added after and that the boat layout (two heads) was more critical, as well as the overall condition (I knew I could not deal with a project boat, one that always needs something fixed or replaced).

Julie and I loved Pay to Play, when we first saw her and we ended up buying her a year and a half later.

So up and down the coast we came and went, I’d ask people, but most only were familiar with active stabilizers that while easy to use, push a button, would cost above $40k.:eek:

Having run aground three times in the first month, while I did expect that frequency to decrease, I knew it wasn’t going to zero in this lifetime. So, it just also confirmed that I needed paravanes.

Here are the numbers so far and as I compile more data, my experience has been that these numbers after only two days will always be in the ball park and pretty representative. If not, I’ll let you know.;)

Fish (aka paravanes) in the water, this gets reduced to a few degrees each direction, with the bad ones to about 10° !

Overall roll is reduced by at least 75%.

The fact that I was hit with a 4 to 5 ft. wake this morning, and we didn’t roll at all, says it all.

My life is transformed.

I’ll write about The Rig and Rigger next 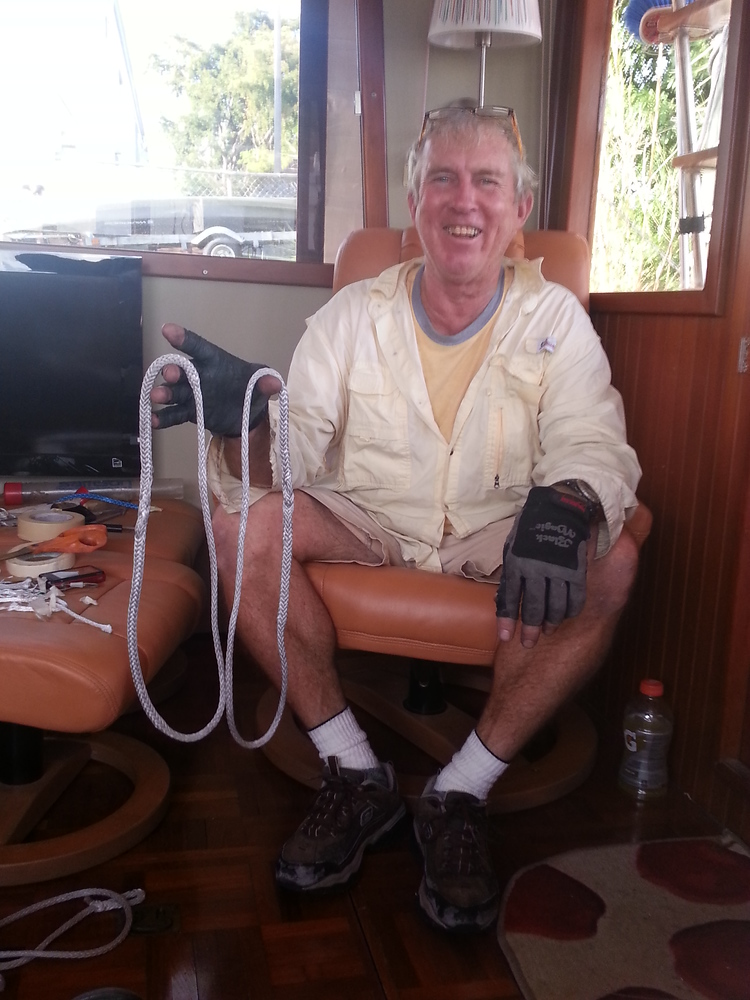