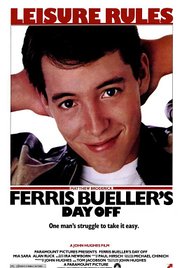 Yes, it was on Paramount Vietnam this afternoon and while I have not seen it that much, I do recognize that it’s an iconic film of the 1980’s in middle America.

But my rant and rave is not about that, but about the reviews I read on IMDB: http://www.imdb.com/title/tt0091042/

There are seemingly people who having thought the world started sometime in the late 20th century and then having “matured” around 2010 if ever, they now think that every movie about kids cutting high school should have cars blowing up and kids vandalizing everything they can touch.

The fact that only in Hollywood do we see such antics.  Even today, when kids cut school, they don’t spend their time destroying stuff.  No, they simply do things that are more interesting, because school and classes simply have too many adults who should not be doing what they are doing.

But that’s another story.