Anchoring at Night in Strange Places; It’s not for the Faint Hearted.

Only day’s away from completing this 2,000-mile, two-month journey, I found myself breaking yet another of my hard and fast rules I made for myself 5 years ago.  Entering yet another harbor at night, and having to anchor by radar, avoiding darkened, moored boats and mooring balls.

But like most hard and fast rules, I had to weigh the circumstances against various risks. In this case, anchoring at night was the least risky option. I’d left Channel Island Harbor at 04:00 for the 120 nm voyage to San Luis Obispo harbor. I’d planned on 19 hours. Thus, to arrive before sunset, would require me to leave the Channel Islands at midnight.

Leaving anyplace at midnight means a total disruption of my sleep cycle. I’d be starting a long trip tired and already behind my personal power curve. By leaving at 04:00, I’d be able to get a reasonable 6 hours sleep and 03:00 is on my natural wake up curve (though normally, I’d go back to sleep for another 3 hours).

Therefore, anchoring in a strange harbor at night seemed for me to be the lessor of two evils.

Let’s talk some basics. Four years ago, I hated my Raymarine E-80 Radar. I felt (and still do) that it was 1980’s technology, dressed to look like the 21st century. It was on my lest to replace at the earliest opportunity when money allowed. I had wanted a radar that I could integrate into my Coastal Explorer and C-Map chart plotter, navigation program. 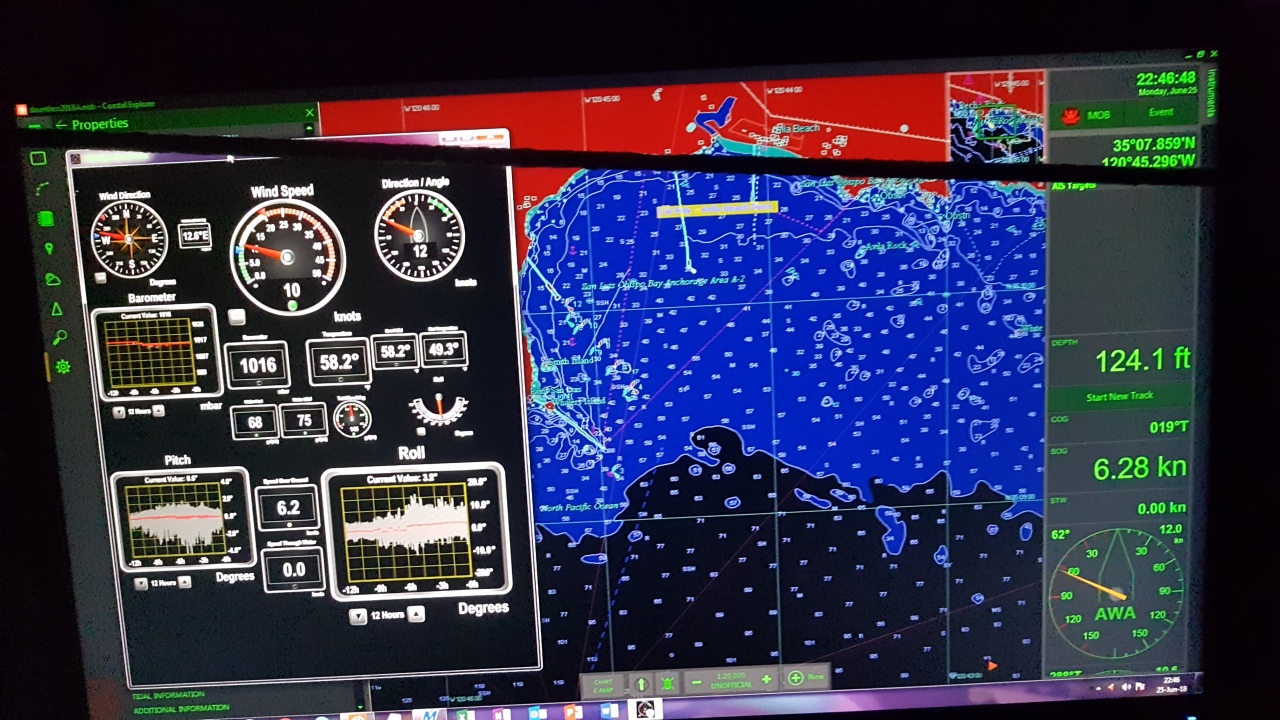 Using the “Auto” settings, the E-80 will show you if the Exxon Valdez is bearing down on you, but otherwise, it either filters too much or not enough to be useful for close in maneuvering. As the miles and time increased under my belt, I learned how to best fine tune the radar using the manual settings for gain and sea state (which is basically a filter) to make it an effective tool.

Whenever I start the engine, I also turn on the: radar, navigation lights, auto pilot, VHF radios and horn.

While underway I’m constantly checking and identifying any radar contacts visually, as well as on the navigation charts (for navigation markers, buoys, etc.).

As soon as I spot something the radar does not see, I adjust the radar, fine tuning so to speak. Normally this is just a matter of adjusting the sea state setting, though sometimes I also must fine tune the gain. E.g. I may see a fishing skiff a half mile off my starboard quarter, but it’s not showing up on the radar. I’ll have to lower the sea state setting, maybe only a few points, until the skiff shows up, but not the countless wave tops around it.  Sometimes, I’ll have to adjust the gain also.

My goal is always for the radar to show me potential hazards, without showing me wave tops. For the last couple of years, my tuning technique has been good enough to do exactly that. Forget the “auto” settings, they are hopeless.

Since I don’t get many false alarms, this also allows me to maximize the use of the two zone monitors.  For coastal cruising, like I’ve done since entering the Pacific Ocean, I set up a ring at ½ mile, that’s an 1/8 of a mile thick. Thus, if anything enters that ring you get an alarm. If you just put a circle around your boat at ½ mile, the radar will see some clutter very close to the boat and thus render the alarm, ineffective at best and annoying at worse. I make this ring go about 220° to 300° around the boat. That way it will see something approaching from the stern quarters, but not directly behind, as the radar will occasionally see a reflection of the mast, again making it ineffectual.

On the open ocean, well away from land, I’ll basically double these distances.

If I do get any false alarms, I adjust again. Usually it happens as the sea state gets worse (bigger seas).

For my set up, I find values of both the gain and the sea state in the 70’s to work best. In flat seas, I can lower the sea state to just above 50, but again, even changes of 1 or 2 can make a significant difference.

On this night, entering San Luis Obispo (SLO), as the seas calmed as I entered the bay that is protected from the NW through the East, I readjusted the sea state, lowering the filter values. From my charts I knew there was a mooring field, presumably with some moored boats. I adjusted the E-80 so that it would pick up objects as small as the mooring balls. Had the seas been above 2 to 3 feet, this would have been an impossibility, but if I had such seas in the harbor, I wouldn’t be stopping in any case.

This night, with strong NW winds, the harbor was well sheltered and the seas where maybe half a foot or less. Under those conditions the radar will do well.

I open and secure both pilot house doors, so that I can have quick access to looking out. I also go to the bow to scan the approach with binoculars (7×35), which I find very effective a night in poor light conditions.

Thus, I have that visual picture in my head, while checking the radar to ensure it’s seeing the same things.  Again, because I am constantly doing this in the daytime in good visibility, I have the confidence to know what the radar is telling me at night, when I must trust

Here is a short video of  it of me getting ready to enter the harbor:

Here are some stills made 2 minutes before the above video: 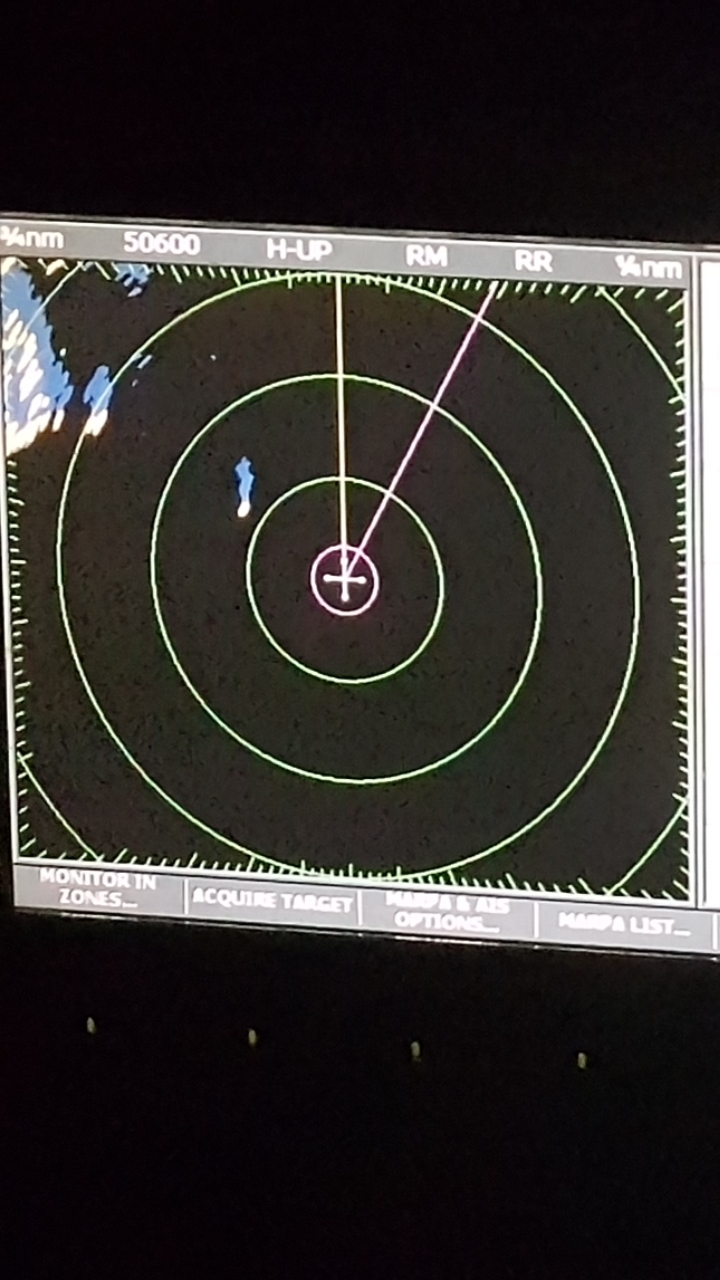 The radar 2 min before I took video

Coastal Explorer using C-Maps above, Navionics on tablet below

Three years ago, going through the main shipping channels of the Kattegat to the Skagerrak over the top of Denmark, I was terrified by what my brain perceived as the massive ship about to crush Dauntless. I was outside the channel, marked m red buoy, I knew the ship had to stay in the channel. The radar told me the buoy and this massive ship were ¼ mile distant, but my brain, every time I looked at the ship, I could swear was less than 50 feet away.

My mind was so convinced this ship was towering over us, that even as I checked and rechecked the positions of the markers on the chart and the ship and marker on the radar, all showed the target as more than a quarter mile away, but my mind would just not accept it.

I only calmed down when the ship was past.  In the daytime, my mind would not have been fooled, but at night, the perspective of distance, becomes very difficult.

I realized then that if I was going to continue to travel at night and not die of a heart attack, I had to make sure I knew exactly what the radar was telling and what it wasn’t and once done, accept what it showed.

So, this night, almost midnight, as I pulled into SLO bay, the radar guided me to a large area with a diameter of about half a mile with no mooring balls, though there were a couple of boats anchored on the west edge.

No fuss; no muss,

The trip from CI Hbr to SLO. The Maretron data for pitching and rolling shows I did a fair amount after I rounded the corner to head north.