This was written in June 2016, but never published. The recent Trawler Forum post about paravanes made me look for what I had written already and discovered I had never published this. So , here it is.

While the Pacific Rim is my destination, I am actually referring to the movie, Pacific Rim Movie. Not the best of movies, I still find it hard to get my mind around why a giant robot would be effective against a giant monster.  Let’s not even address the premise that this giant robot has to be controlled by two people.

Two people, they must not have done 3 legged races in camp as kids.

But I am sitting here in Largs, Scotland listening to the soundtrack, which is dramatic.

But besides the soundtrack, I do love Idris Elba.  And if you have not watched Luther, make sure you watch it from season 1, episode 1.

But then he really made his  name in The Wire as Stringer Bell. A depressing, but extremely insightful series.

I’m waiting for my next crewmates to arrive, Dan & Robin.

Brian left yesterday and of course he took the good weather with him.  From his second day, we had nothing but fair winds, sunny skies and beautiful cruising.

That also allowed us to get Dauntless more organized and in ship shape having sat in the wind and rain for 8 months.  There are still a few projects to complete.  My new goal for the Wallas DT40 heater is to have it completely installed before I reach Alaska.  Stay tuned. (Ha, still not installed, but I’m not in Alaska yet!)

I also had the opportunity to redo my geometry to determine the deepest I can run the paravanes birds without the possibility of hitting the prop or rudder.

Just to show that the laws of math and science have not changed all that much in the two years, the magic number is 17 feet, which is the same number I came up with two years ago.

Now, if you have been reading my blog for any length of time, you will know of my tendency to rant and rave about politicians who make decisions not based on any facts or science, but simply because it looks, sounds, tastes good.

Well, I am guilty of doing the exact same thing in this case.  Which further makes my case that the right number is the right number, more or less does not make it any better, just different.

So in my case, I came up with 17 feet.  This was also confirmed because my friend Larry on Hobo, another KK42, runs his at 18 feet because his poles are about 2 feet longer than mine.

So two years ago (2014), having the magic number of 17, I decide to make it 15 just to be on the “safe” side.  Sounds like a no-brainer right?  Then as I am actually rigging them, I decide to take another couple feet off, to make my no-brainer even better.

What could go wrong?  Am I not being 50% safer?  That’s what a politician would try to tell you.

No, I was being an idiot. Made even stupider because I of all people have taught wave mechanics and what happens to the actual water molecules in a wave.

In last fall’s crossing of the North Sea, it all became clear.   While crossing the North Sea from Norway to Scotland in September 2015, on the first day, (of the 4 day trip), the winds were from the NW at 20 knots, gusting to 37, producing seas 12 to 18 feet.

But the paravanes were not as effective as they should have been. I realized I was running the birds too shallow.  The paravane bird was getting caught in the rotor of the wave.

Waves are created by energy passing through water, causing it to move in a circular motion, producing a rotor. While the wave progresses, the particles of water in the wave itself, move up and down.  If you watch a leaf floating on the water, even though the waves move, absent current, the leaf stays in place. 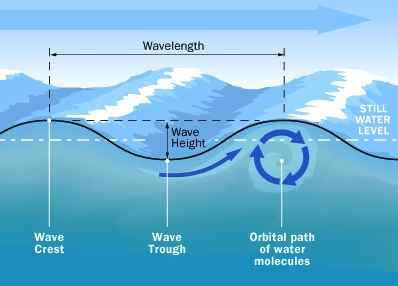 Therefore, instead of pulling the boat down and thus reducing the rolling motion, all of a sudden the bird is actually being pushed up.  Sometimes this would cause the bird to fly out of the water.  Once I stopped and put another 5 feet on line on the bird, all was good and I got to Scotland.

So less is not always better.

And now, I will show you why more is not always better either.  Having Brian on our 2016 maiden voyage turned out to be, was a godsend.

I had a thinking partner who helped me articulate my thoughts and ideas.

The only moment where two people was a detriment and not a plus was in getting back to Dauntless on the dingy.  I got out, Brian got out, the dingy drifted away.

We started the engine, detached ourselves form the mooring and the dingy was reacquired 10 minutes later.

Had either of us been alone, we would have known the dingy was not secured.